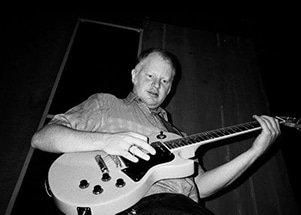 Curtis Hasselbring is a trombonist, guitarist and composer. Growing up in the midwest, Curtis relocated to the Boston, where he attended New England Conservatory and found himself immersed in a creative scene of like-minded musicians who channeled their love of a broad palette of genres into their musical language. After earning Masters degree at Rutgers University (M.M. in Jazz Performance), Curtis made his home in Brooklyn, N.Y. where he immediately immersed himself in the jazz, world and experimental music scenes.  Curtis has performed and recorded with many artists including Medeski Martin & Wood, Slavic Soul Party, Matt Wilson, John Hollenbeck, Golem, the Either Orchestra, and Tom Harrell among others. Curtis appears on close to 100 recordings including four releases as a leader (discography here). Mostly known for his trombone playing, Curtis has also played guitar since his teens and continues to freelance on that instrument playing in a wide variety of situations ranging from instrumental rock (with Chris Lightcap’s Superette), Romanian music (with Sanda Weigl) to his own prog-surf trop-tronica band, the Curha-chestra.
We use cookies on our website to give you the most relevant experience by remembering your preferences and repeat visits. By clicking “Accept”, you consent to the use of ALL the cookies.
Do not sell my personal information.
Cookie SettingsAccept
Manage consent