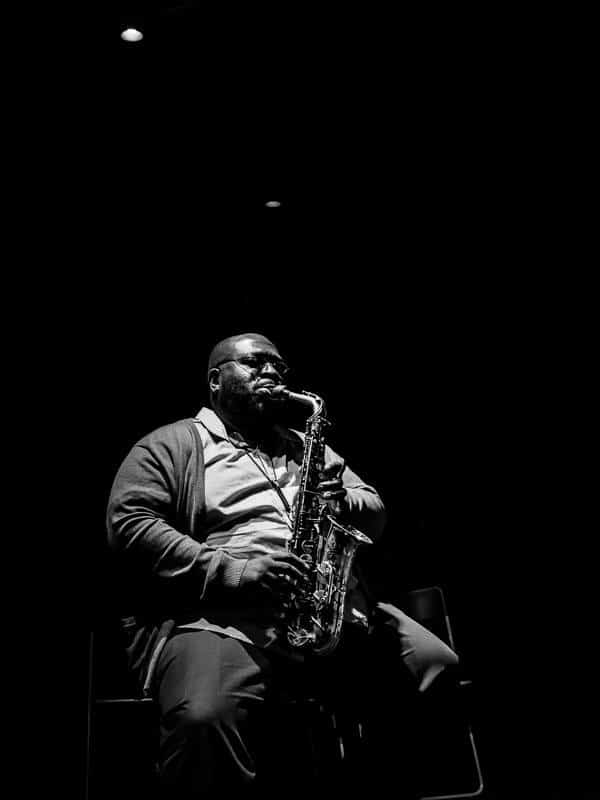 Over the past decade, Darius Jones has created a recognizable voice as a critically acclaimed saxophonist and composer by embracing individuality and innovation in the tradition of African-American music. “Jones’ concept is proudly his own,” writes Philip Clark in The Wire. [His music] poses big questions about the relationship between the African-American tradition of spirituals, blues and gospel, and now.” With New York City as his base since 2005, Jones has brought his unique sound to dozens of cities around the United States, Canada and Europe.

Jones early on established himself as a powerful voice in the jazz community and was nominated in 2013 for Alto Saxophonist of the Year, and for Up & Coming Artist of the Year two years in a row for the Jazz Journalists Association Jazz Awards. Jones was one of Jazz Times’ Debut Artists of the Year for 2009 and was featured in the Wall Street Journal in 2011. In 2012 he was featured in DownBeat and on WBGO’s The Checkout. Jones’ 2012 release, Book of Mæ’bul (Another Kind of Sunrise) was listed among NPR’s Best Top 10 Jazz Albums of that year. “Jones speaks through his alto in an original and unforced language,” writes DownBeat’s Joe Tangari. Critics have called him “robustly creative” (Nate Chinen, New York Times) and “one of NYC’s most incisive and passionate saxists” (Time Out New York). AllAboutJazz.com reviewer Troy Collins writes, “Jones has set the stage for a winning series of albums designed to document his rise as one of the most impressive and unique voices of our time.”

More recently The New York Times named Jones among the Best Live Jazz Performances of 2017 for his Vision Festival performance with Farmers by Nature.

Signed to AUM Fidelity records in 2009, Jones has released a string of diverse recordings which comprise his Man’ish Boy Epic, featuring music and images evocative of Black Futurism.

In 2008 Jones was awarded the Van Lier Fellowship by Roulette, which he used to launch his chamber ensemble, the Elizabeth-Caroline Unit, a project dedicated to new works for voice. Roulette continued their support for Darius’ work through a Jerome Foundation Commission, and he was a Jerome Artist-in-Residence when the Elizabeth-Caroline Unit premiered the first section of The Oversoul Manual, in the Spring of 2014. Jones made his compositional debut at Carnegie Hall with the same work in October of 2014. In March 2018, Jones presented a new composition entitled LawNOrder a dramatic commentary on social justice and American politics, at Willamette University in Salem, Oregon.

In 2013, Jones was awarded the French-American Jazz Exchange grant for a collaboration with French vocalist Emilie Lesbros.

Jones graduated from Virginia Commonwealth University with a Bachelors in Jazz Studies in 2003, earning a Master’s Degree in Jazz Performance/Composition from New York University in 2008. He also taught New Music Improvisation there for a year as an adjunct professor. Jones taught saxophone and improvisation at Columbia University in 2017.

Of note, Jones was featured in the Wall Street Journal and BBC’s Jazz on 3 in 2011. In 2012 he was featured in the New York City Jazz Record, JazzTimes.com, the Village Voice Blog, DownBeat, and on WBGO’s The Checkout. Darius was featured on the cover of Portuguese magazine, Jazz.pt in 2012, and on the cover of Italian magazine, Jazz Colours, in 2013. Darius’ 2012 release, Book of Mæ’bul (Another Kind of Sunrise) was listed among NPR’s Best Top 10 Jazz Albums of that year.