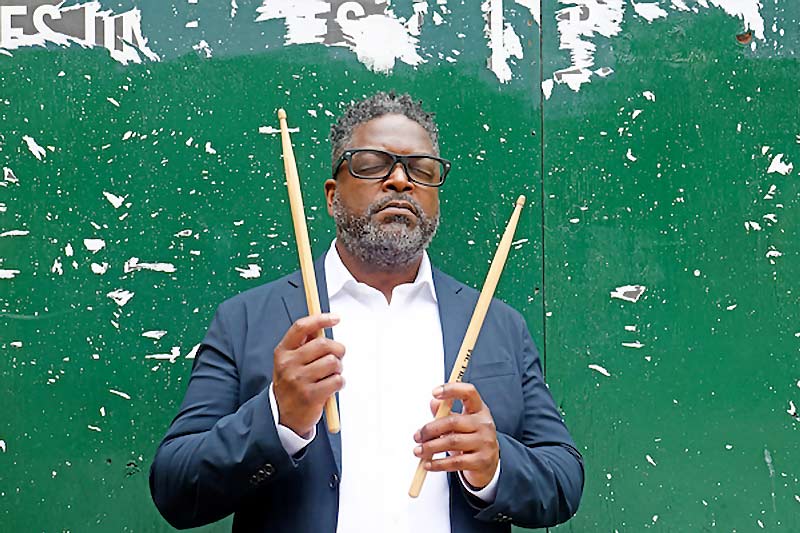 Although jazz drummer Gerald Cleaver has been known in the Detroit area as a great musician and educator since the early ’90s, he was not so well-known to listeners outside of the Midwest until an explosion of recordings released starting in 1999 brought his powerful and tasteful drumming to the attention of jazz listeners everywhere. Born and raised in Detroit, Cleaver became deeply involved with the jazz scene there, working with respected area musicians including bassist Ali Muhammad Jackson, trumpeter Marcus Belgrave, tenor saxophonist Donald Walden, bassist Rodney Whitaker(on Hidden Kingdom), guitarist A. Spencer Barefield, reedsman Wendell Harrison, and many others. An NEA fellowship allowed Cleaver to study with drummer Victor Lewis; Cleaver then earned a music degree from the University of Michigan. During his years as a student, he had a band with keyboardist Craig Taborn called the Tracey Science Quartet. Cleaver went on to become a jazz educator after graduating and began teaching in Detroit in the early ’90s, later joining the jazz faculty at the University of Michigan. Splitting time between Detroit and N.Y.C., where he subsequently moved, Cleaver has worked with a long list of great jazz leaders including Roscoe Mitchell (notably on 1999’s Nine to Get Ready), Henry Threadgill, Jacky Terrasson, Hank Jones, Tommy Flanagan, Charles Gayle, Reggie Workman, and Eddie Harris, among others. Cleaver can be heard in a number of groups and settings, including the Joe Morris Quartet (with releases on Omnitone and Knitting Factory); the Matthew Shipp Quartet (Pastoral Composure); young bassist Chris Lightcap’s debut as a leader, Lay-Up; and vocalist René Marie’s Maxjazz release. Cleaver has been active with such additional groups as the Roscoe Mitchell Trio; Bishop Cleaver Flood (featuring Ann Arbor reedsman Andrew Bishop and bassist Tim Flood); David Torn’s Prezens; and his own sextet, Gerald Cleaver’s Veil of Names, which includes guitarist Ben Monder, violinist/violist Mat Maneri, bassist Reid Anderson, saxophonist Andrew Bishop, and former college collaborator Craig Taborn. Adjust was released in 2001 on FSNT (Fresh Sound New Talent), which also released Gerald Cleaver’s Detroit in 2008. Farmers by Nature, with William Parker and Craig Taborn, appeared from Aum Fidelity in 2009.
We use cookies on our website to give you the most relevant experience by remembering your preferences and repeat visits. By clicking “Accept”, you consent to the use of ALL the cookies.
Do not sell my personal information.
Cookie SettingsAccept
Manage consent