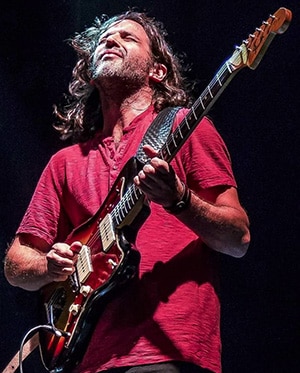 Guitarist Jonathan Goldberger spent most of his youth on the outskirts of the Everglades in Florida. From there he migrated west to the Rockies where he studied with musical guru Art Lande and played and toured with the cult spacey/bluesy Fat Mama. He found his way to Brooklyn in 2001 where he has worked extensively in both the music and film worlds. Goldberger has composed and produced music for two award-winning feature films, Trans and The Hawk is Dying. He performs and tours with artists and bands including Red Baraat, Jim Black (John Zorn’s Bagatelles…including a performance at the Village Vanguard), and Joe Russo (Hooteroll, etc) among many others. Recent recordings include the acoustic collective Surface to Air, Chris Lightcap’s Superette (with Nels Cline and John Medeski), Red Baraat, and his own album Visitors (with JP Schlegelmilch and Jim Black), one of Rolling Stone’s 20 Best Jazz Albums of 2018.
We use cookies on our website to give you the most relevant experience by remembering your preferences and repeat visits. By clicking “Accept”, you consent to the use of ALL the cookies.
Do not sell my personal information.
Cookie SettingsAccept
Manage consent