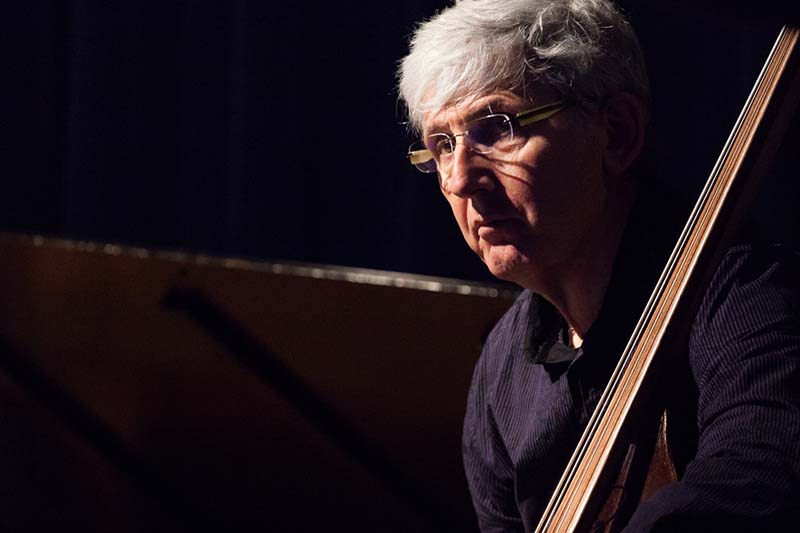 Mark Dresser is a Grammy nominated, internationally renowned bass player, improviser, composer, and interdisciplinary collaborator. At the core of his music is an artistic obsession and commitment to expanding the sonic, musical, and expressive possibilities of the contrabass. He has recorded over one hundred forty CDs including three solo CDs and a DVD. From 1985 to 1994, he was a member of Anthony Braxton’s Quartet, which recorded nine CDs and was the subject of Graham Locke’s book Forces in Motion (Da Capo). He has also performed and recorded music of Ray Anderson, Jane Ira Bloom, Tim Berne, Anthony Davis, Dave Douglas, Osvaldo Golijov, Gerry Hemingway, Bob Ostertag, Joe Lovano, Roger Reynolds, Henry Threadgill, Dawn Upshaw, John Zorn. Dresser most recent and internationally acclaimed new music for jazz quintet, Nourishments (2013) his latest CD (Clean Feed) marks his re-immersion as a bandleader. Since 2007 he has been deeply involved in telematic music performance and education. He was awarded a 2015 Shifting Foundation Award and 2015 Doris Duke Impact Award. He is Professor of Music at University of California, San Diego.

“Mr. Dresser, a bassist who is one of the great instrumental forces in recent American jazz outside of the mainstream” New York Times