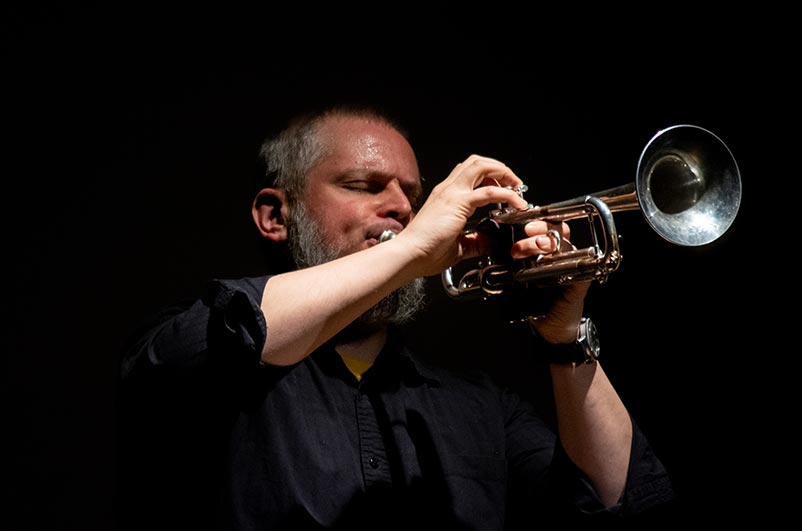 NATE WOOLEY was born in 1974 in Clatskanie, Oregon, a town of 2,000 people in the timber country of the Pacific Northwestern corner of the U.S. He began playing trumpet professionally with his father, a big band saxophonist, at the age of 13. His time in Oregon, a place of relative quiet and slow time reference, instilled in Nate a musical aesthetic that has informed all of his music making for the past 20 years, but in no situation more than his solo trumpet performances.

NATE MOVED TO NEW YORK IN 2001, and has since become one of the most in-demand trumpet players in the burgeoning Brooklyn jazz, improv, noise, and new music scenes. He has performed regularly with such icons as John Zorn, Anthony Braxton, Eliane Radigue, Ken Vandermark, Fred Frith, Evan Parker, and Yoshi Wada, as well as being a collaborator with some of the brightest lights of his generation like Chris Corsano, C. Spencer Yeh, Peter Evans, and Mary Halvorson.

WOOLEY’S SOLO PLAYING has often been cited as being a part of an international revolution in improvised trumpet. Along with Peter Evans and Greg Kelley, Wooley is considered one of the leading lights of the American movement to redefine the physical boundaries of the horn, as well as demolishing the way trumpet is perceived in a historical context still overshadowed by Louis Armstrong. A combination of vocalization, extreme extended technique, noise and drone aesthetics, amplification and feedback, and compositional rigor has led one reviewer to call his solo recordings “exquisitely hostile”.

Wooley has been gathering international acclaim for his idiosyncratic trumpet language. Time Out New York has called him “an iconoclastic trumpeter”, and Downbeat’s Jazz Musician of the Year, Dave Douglas has said, “Nate Wooley is one of the most interesting and unusual trumpet players living today, and that is without hyperbole”

Nate is the curator of the Database of Recorded American Music (www.dramonline.org) and the editor-in-chief of their online quarterly journal Sound American (www.soundamerican.org) both of which are dedicated to broadening the definition of American music through their online presence and the physical distribution of music through Sound American Records. He also runs Pleasure of the Text which releases music by composers of experimental music at the beginnings of their careers in rough and ready mediums.

In 2011 he was an artist in residence at Issue Project Room in Brooklyn, NY and Cafe Oto in London, England. In 2013 he performed at the Walker Art Center as a featured solo artist. Wooley was a 2016 recipient of the Foundation for Contemporary Arts Grants to Artists Award and a 2017 recipient of funding from the Mid-Atlantic Arts Foundation for his work with Seven Storey Mountain.

Nate Wooley made his premiere with the New York Philharmonic in the fall of 2018 as a soloist in Ashley Fure’s Filament, performed in the debut of the orchestra’s season.