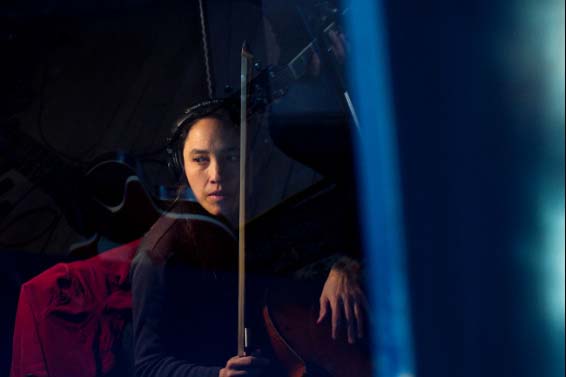 Cellist, improviser, composer Peggy Lee was born and raised in Toronto, Ontario. She studied classical cello, completing a bachelors degree in performance at the University of Toronto as a student of Vladimir Orloff and Denis Brott. She furthered her studies on the cello with lessons with Martha Gerschefski in Atlanta Georgia. In the fall of 1988 Peggy began a year residency with a string quartet at the Banff Centre in Banff, Alberta. It was here that she first became interested in collaborating with artists from different mediums and in veering away from the classical path. This led to a decision to move away from the known and thus to her relocating to Vancouver, B.C. where she now makes her home.

Peggy’s first forays into improvisation in Vancouver happened with dancers at the EDAM (experimental dance and music) studio at the Western Front and eventually led to her meeting and joining guitarists Ron Samworth and Tony Wilson in their respective bands; as well as becoming a member of the New Orchestra Workshop, which went on to have interesting and fruitful collaborations with Butch Morris, Wadada Leo Smith, Ren Lussier, Barry Guy and George Lewis.

Peggy continues to collaborate frequently with Ron and Tony and with her husband, drummer Dylan van der Schyff, as well as with many other longtime musical associates including Dave Douglas, Wayne Horvitz, Robin Holcomb, Veda Hille and Lisa Miller. She also leads or co-leads a number of musical projects: The Peggy Lee Band, Film in Music, Waxwing (with Tony Wilson and Jon Bentley) and Beautiful Tool (with Mary Margaret O’Hara).

She has also collaborated extensively in theatre and dance with companies and artists such as Ruby Slippers, Rumble Theatre, Presentation House, David Hudgins, Peter Bingham and Delia Brett.

In 2005, Peggy received the Freddie Stone Award for integrity and innovation in music and in 2010 she was awarded a Jesse Richardson Theatre Award for outstanding composition.