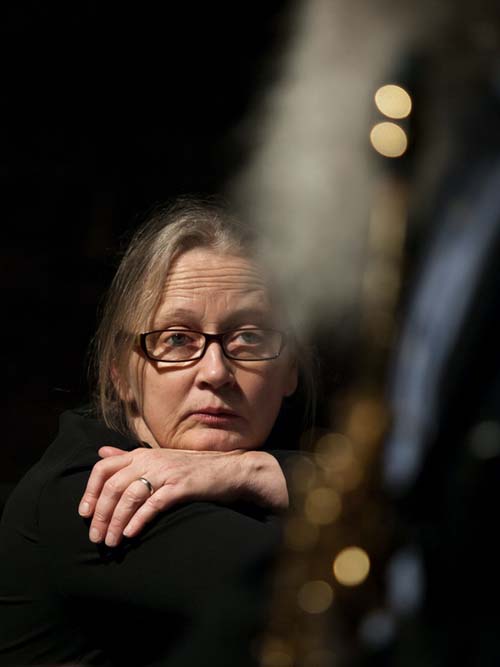 Recent recordings include The Point of It All, Solos (Songlines) and John Brown’s Body (Tzadik). The Big Time, Little Three, Rockabye and Robin Holcomb are four critically acclaimed recordings of Ms. Holcomb’s songs and instrumental compositions on the Nonesuch label. Other recordings featuring her performances and innovative arrangements include Things About Comin’ My Way: A Tribute to the Music of the Mississippi Sheiks (Red Hen), Rogues Gallery: Pirate Ballads, Sea Songs, and Chanteys, The Anthology of American Folk Music: Revisited (Shout Factory), Burt Bacharach and Serge Gainsbourg tribute compilations (Tzadik) and Bill Frisell’s Nashville and Kaddish. She is currently completing a recording of original songs and arrangements for piano and voice.

Ms. Holcomb is a founder and co-director of The New York Composers Orchestra and WACO (The Washington Composers Orchestra), ensembles for which she is also conductor, pianist and a principal composer. Other current performing ensembles include a longstanding duo project with cellist Peggy Lee and The Robin Holcomb Ensemble. Composing instrumental and vocal music for a wide variety of chamber ensembles and soloists, she has been commissioned to create scores for dance, film and theatre.

Her most recent song cycle We Are All Failing Them, a sidewise regard of the Donner Party saga with film and magical objects, premiered at Seattle’s Northwest Film Forum. An earlier song cycle with film, The Utopia Project was based on histories and artifacts from utopian communities which thrived in the Pacific Northwest in the late 1800s and premiered at Mass MoCA. Angels at the Four Corners, a song cycle reflecting the composer’s experiences sharecropping tobacco in North Carolina and O, Say a Sunset, regarding of the life and work of American environmentalist and author Rachel Carson both toured the United States. Ms. Holcomb collaborated with composer Wayne Horvitz on the song cycle Smokestack Arias (tales of women involved in the Everett Massacre), The Heartsong of Charging Elk (based on the novel by James Welch) and was a featured performer in his Joe Hill: Sixteen Actions for Orchestra, Vocalists and Soloist. In recent years, she has created extended suites celebrating the historic legacy of Seattle landmarks (Washington Hall, Hitt Fireworks Factory) for youth orchestras, bands and choir.

Ms. Holcomb’s work has been recognized and generously supported by grants and fellowships from, among others, The League of American Orchestras, The Virginia B. Toulmin Foundation, The MAP Fund, The National Endowment for the Arts, Meet the Composer, 4Culture, Artist Trust, The National Performance Network and the Seattle Office of Arts & Culture.