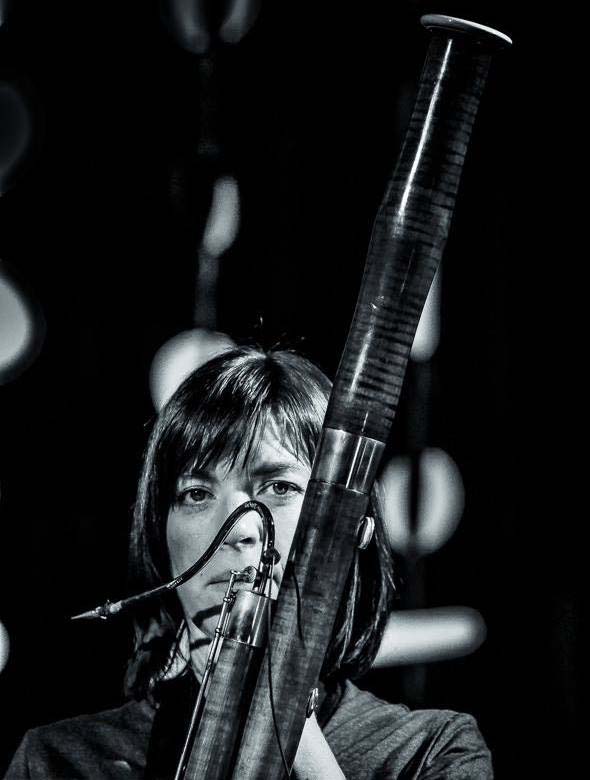 The Wire magazine places Sara Schoenbeck in the “tiny club of bassoon pioneers” at work in contemporary music today and the New York Times has called her performances “galvanizing” and “riveting, mixing textural experiments with a big, confident sound.”

While focusing on the intersection between extended technique and melody Sara works to expand the notion of what the bassoon is capable of in both notated and improvised music. She is a member of Anthony Braxton’s 12+1(tet) and the Tri-Centric Orchestra, Gravitas Quartet with Wayne Horvitz, Ron Miles and Peggy Lee and Harris Eisenstadt’s Golden State Quartet. She performs and tours regularly with the Schoenbeck/Horvitz Duo; Wavefield Ensemble Petr Kotek’s SEM ensemble, the composers group WetInk, Marty Ehrlich’s Duende Winds with Nicole Mitchell and Tomeka Reid; Nels Cline Lovers Ensemble, Adam Rudolph’s Go Organic Orchestra and the Michael Leonhart Orchestra. In years past Sara performed with Butch Morris; Eve Risser’s White Desert Orchestra, Dakah Hip Hop Orchestra; Vinny Golia’s Large Ensemble and the Santa Barbara Symphony. Sara can be heard on music and film recordings including Matrix 2 and 3, Spanglish and Dahmer. She is looking forward to releasing her debut album as a leader in a series of intimate written and improvised duets in the Fall of 2021 on Pyroclastic Records.

Sara received her BFA from the San Francisco Conservatory of Music studying with Stephen Paulson and Rufus Olivier and MFA from the California Institute of the Arts where she studied with Julie Feves. She has been adjunct faculty at California Institute of the Arts, Citrus College and Pasadena Conservatory and given master classes at Amherst College, Hampshire College, Cornish College, University of Denver, Western Washington University and Sacramento State University.