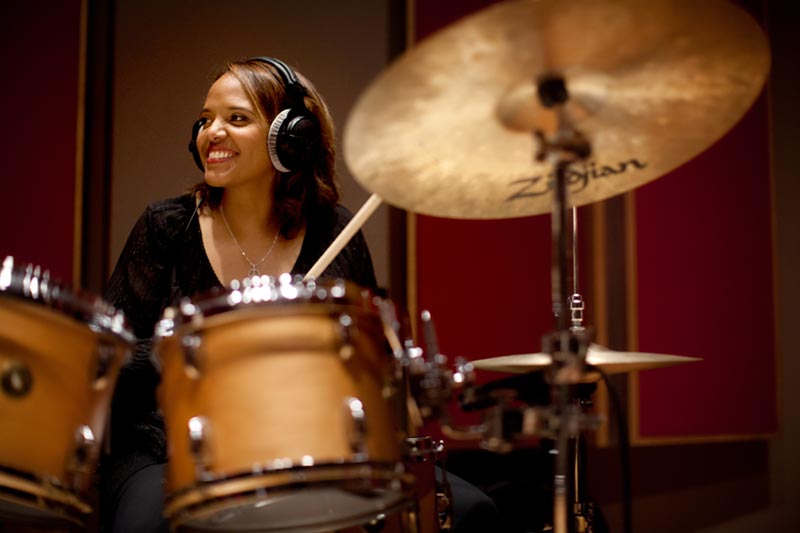 Three-time GRAMMY® award-winning drummer, producer, educator and activist, Terri Lyne Carrington started her professional career as a “kid wonder” while studying under a full scholarship at Berklee College of Music in Boston. In the mid ’80’s she worked as an in-demand drummer in New York before gaining national recognition on late night TV as the house drummer for both the Arsenio Hall Show and Quincy Jones’ VIBE TV show.

In 1989, Ms. Carrington released a GRAMMY®-nominated debut CD on Verve Forecast, Real Life Story, and toured extensively with Wayne Shorter and Herbie Hancock, among others. In 2011 she released the GRAMMY®Award-winning album, The Mosaic Project, featuring a cast of all-star women instrumentalists and vocalists, and in 2013 she released Money Jungle: Provocative in Blue, which also earned a GRAMMY®Award, establishing her as the first woman ever to win in the Best Jazz Instrumental Album category.

To date Ms. Carrington has performed on over 100 recordings and has worked extensively with luminary artists such as Al Jarreau, Stan Getz, Woody Shaw, Clark Terry, Cassandra Wilson, Dianne Reeves, James Moody, Yellowjackets, Esperanza Spalding, and many more. Additionally, Ms. Carrington is an honorary doctorate recipient from Berklee, and currently serves as Founder and Artistic Director for the Berklee Institute of Jazz and Gender Justice.

In 2019 Ms. Carrington was granted the Doris Duke Artist Award, a prestigious acknowledgment in recognition of her past and ongoing contributions to jazz music. Her current band project, Terri Lyne Carrington and Social Science (a collaboration with Aaron Parks and Matthew Stevens), released their debut album, Waiting Game, in November, 2019 on Motema Music.

Waiting Game has been celebrated as one of the best jazz albums of 2019 by Rolling Stone, Downbeat, Boston Globe and Popmatters. Downbeat describes the album as, “a two-disc masterstroke on par with Kendrick Lamar’s 2015 hip-hop classic, ‘To Pimp a Butterfly’…” Ms. Carrington was named as JazzTimes Critics Polls’ Artist of the Year, Jazz Artist of the Year by Boston Globe, and Jazz Musician of the Year by the Jazz Journalists Association.