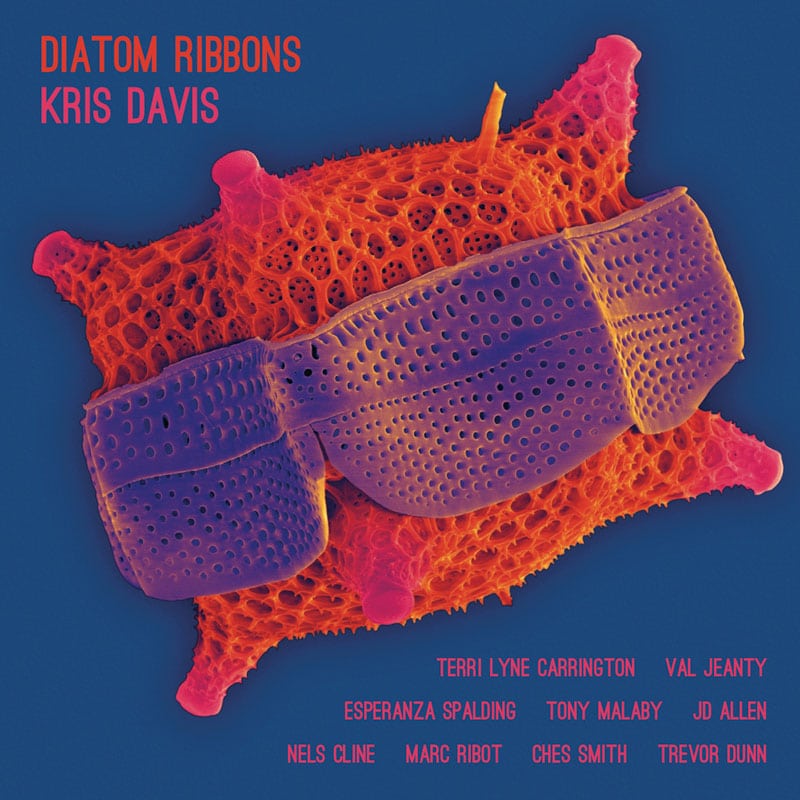 When expertly realized by such a vibrant cast of collaborators, this suite of strategies brings several of Davis’ skills—as a player, composer, and bandleader—to a new, heightened state of expression.

When expertly realized by such a vibrant cast of collaborators, this suite of strategies brings several of Davis’ skills—as a player, composer, and bandleader—to a new, heightened state of expression.

Kris Davis, 39, has spent years as her generation’s powerhouse pianist in waiting. No longer. On “Diatom Ribbons,” her skills as a composer, band assembler, system builder and improviser — a musical auteur, basically — come fully into focus.

END_OF_DOCUMENT_TOKEN_TO_BE_REPLACED

The best music—within the jazz world and beyond it—can contain a multitude of ideas and sounds, reference endless genres and tell listeners something about the moment that it was recorded, as well as the past. Diatom Ribbons­—and actually a lot …

END_OF_DOCUMENT_TOKEN_TO_BE_REPLACED

When I compose, I’m alternating between the micro and macro, shaping the details and then standing back to see how they make up the structure of the composition. While writing for this album I learned about diatoms, which are unicellular microalgae that live in the oceans and freshwater and soils. They contribute massively to the planet’s oxygen supply, and there are something like one hundred thousand species. From satellite images above oceans and lakes, huge blooms sometimes appear as beautiful zigzags and ribbons. Up close under a scanning electron microscope, you can see these incredible, ornate structures. So seeing these plants extremely close-up and then so far away, I made a connection between the process of composition and my experience of nature, and that changing your proximity to the same object or idea can dramatically alter your experience of it, often yielding unexpected and inspiring results.

When she was composing the pieces for Diatom Ribbons, pianist Kris Davis was musing about diatoms and larger themes of nature and science. She was also looking for opportunities to explore new musical relationships with drummer Terri Lyne Carrington and vocalist Esperanza Spalding (both Grammy winners) and ground-breaking turntablist Val Jeanty. Carrington, Jeanty and Spalding first worked with Davis on a series of tribute concerts to the late Geri Allen, and there were sparks right away. “We did ten concerts of Geri’s music,” Davis says, “so we were diving into her world. And then Cecil Taylor passed away not long after and I started revisiting all my favorite albums of his. Around this time I was also preparing to play some Monk compositions for the Monk Centennial. Between these concerts and playing/transcribing music by Olivier Messiaen, Henry Threadgill and Youssou N’Dour—there were all these influences going on here.”

A January 2018 residency at The Stone in New York proved the perfect opportunity for Davis to investigate further. She asked Carrington and Jeanty to join her in a wholly improvised gig, Carrington’s very first in fact, “and it was super killing,” she says. “And Val’s role in it, her hip-hop influence, being able to shape the music using words and also ‘nature’ sounds and percussion—it opened a whole new palette for me to consider when I was conceptualizing this project.”

Other new relationships blossomed. Davis and Marc Ribot connected through recent performances of John Zorn’s Bagatelles. She met JD Allen on one of the Monk Centennial gigs and they were eager to do more together. And her producer David Breskin introduced her to Nels Cline, with whom he’s worked extensively. So life had brought Davis into provocative contact with different—one could say separate—communities of players, and Diatom Ribbons was her chance to bring them together. In addition to these new friends, we hear from three longtime Davis colleagues: tenor saxophonist Tony Malaby (paired with JD Allen on the first and last tracks); Ches Smith (the sought-after drummer/percussionist, playing vibraphone here); and free-ranging bassist Trevor Dunn.

Davis also brought in engineer Ron Saint Germain, who had collaborated with Breskin and Davis on three of her previous albums—Save Your Breath, Duopoly and Octopus—and has worked with everyone from Whitney Houston to Soundgarden to Ornette Coleman to Sonic Youth. Saint Germain was indispensable in creating the sharp-focused aesthetic that Davis was after. “It’s mixed and mastered so you feel up close,” Davis says, “right there in the middle of the group and the music being made. The attention to detail is all him, and it was amazing to see how he was able to give the music another dimension.”

On the leadoff title track Davis employs prepared piano, something she introduced on her solo records Aeriol Piano and Massive Threads, using gaffer’s tape and erasers to generate an expressly percussive riff. The voice of Cecil Taylor enters, manipulated by Jeanty. Carrington is textural in approach until she locks in, fiercely in the pocket, no matter how asymmetric the feel. Dunn enters on upright bass just before Taylor’s voice trails off, giving the groove an inspired lift, and when the voice returns later in the piece, Jeanty cuts it up in DJ fashion. In the midst of this the tenors play solos in turn, first Allen, then Malaby. By the end of “Diatom Ribbons” it’s clear that Davis has made a bold and unique sonic departure in her oeuvre — yet one that still sounds every bit like her. The harmonic density, rhythmic acuity, broad dynamics, brilliant touch and sheer technical command of the piano she’s known for are present, and these elements are elevated, rather than overshadowed, by the new groove and sonic complexity.

Regarding some of the voicings on “Diatom Ribbons,” Davis notes the influence of Messiaen, particularly solo piano works like “Petites esquisses d’oiseaux” (“little bird sketches”). She also directly references Messiaen on “Corn Crake,” a bird sketch of her own, for the core Davis/Carrington/Jeanty trio. The spoken-word element comes again via Jeanty: it’s Messiaen mimicking the call of a nightingale, then a corn crake, explaining the latter (in French) as “strange, that iambic rhythm — short, long, in the high grass of the meadow.” As the piece breaks midway into a tight, broken-beat groove, Davis uses a Moog bass sample under her piano solo. But we’re hearing more than one piano, Davis reveals: “I recorded piano tracks for Val, so she had access to eight different cells. This idea came from playing duo with Craig Taborn on our Octopus project, wanting to explore that two-piano concept but with different ‘rules.’ The samples are me playing, with Val manipulating them and ‘chasing’ me as I play the cells in real time.”

The voice of Esperanza Spalding, reciting Gwendolyn Brooks’ poem “To Prisoners,” provides the stark initial focus on “Certain Cells,” which is then both grounded and lifted by another vicious Carrington groove. Dunn (on electric bass) remains perfectly sparse while Cline’s guitar and Smith’s vibes float into abstraction and color. “I love Ches’ touch,” Davis says. “There’s something aggressive about it, but it also sings, and piano and vibes is just such a rich combination.” Along with the fact that “cells” conveys a kind of triple meaning—biological entities, prisons, and collections of notes that create eleven harmonic structures within the composition—Davis chose the Brooks poem for its own multivalence. The poem speaks to Davis’ feelings of frustration and disillusionment regarding the current state of American politics, and offers a sense of strength and solace during a difficult time.

For the form of “Stone’s Throw,” Davis notes, “I envisioned these tectonic plates that shift and place weight unevenly, creating unusual punctuation that I could improvise over, allowing the phrases to float over the ‘plates’ or land on them. The melody uses a similar approach.” “Rhizomes” was originally part of a large-ensemble piece that blended written compositional fragments with “conduction” in the tradition of Butch Morris and Anthony Braxton. Davis re-envisioned it for Diatom Ribbons as a groove-based piece, with dyads acting as a structure for Jeanty to play over, and a twisty, knotty melody for Cline and her to play in unison, and then further as a springboard for Cline’s solo.

“Golgi Complex” refers to a part of an individual cell responsible for processing proteins. The piece appears here in two versions, though Davis wrote the second one first. “The original is really how I envisioned it: as chaos, with this melody that acts as a beacon through that chaos, a theme for everyone to track as they’re improvising. I’ve written five or six variations of it, with the same melody but various accompaniments, and ‘Golgi Complex (The Sequel)’ is one of those variations. But I do want people to recognize that they have the same melody, just in dramatically different landscapes.”

In what could be seen as an echo of her 2016 release Duopoly, Davis joins Carrington on the elegant, subtly Ellingtonian duet “Sympodial Sunflower.” The title is a conscious play on Duke’s “Fleurette Africaine,” but it was Carla Bley more than Duke who inspired the piece. “I was going intensely into her music a few months ago to record her ‘Sing Me Softly of the Blues’ for the New American Songbooks album on New World, and I was thinking about her tango pieces while writing this one.”

The first of two non-originals is “The Very Thing,” by saxophonist Michaël Attias, from his 2010 album Twines of Colesion. Spalding’s vocal is something to remember: her take on Attias’s never-before-recorded lyrics is at once haunting and playful, her wordless improvisation full of searching note choices with dead-on accurate pitch. “I’ve played this tune on gigs with Michaël for many years,” Davis says, “and I’ve been playing his music in my solo concerts. He’s such an underrated composer. The way he recorded ‘The Very Thing’ was more abstract, so I thought it would be interesting to go the other way, make it more concrete, almost like a jazz standard, and see where that could go.”

Julius Hemphill’s “Reflections,” the closing track, came to Davis’s attention through Tim Berne, who showed her Hemphill’s original chart “and I just fell in love with those harmonies,” she remembers. “I’ve been playing that piece solo as well, and I thought it would be great to feature Tony and JD, who are such stylistically contrasting saxophonists, but they both totally thrive in that environment. And I like that we use another composer’s voice to bring these worlds together.”

In many ways that is Davis’ career: bringing people and worlds together, whether curating her eight far-reaching Duopoly encounters, or bringing her energy and insight to the Eric Revis Trio, Ingrid Laubrock’s Anti-House, Tom Rainey’s Obbligato, the Borderlands Trio, and the collective Paradoxical Frog with Laubrock and Tyshawn Sorey. With Diatom Ribbons she intensifies her collaborative impulse, undermining any barriers that might exist between divergent scenes and approaches. There’s every reason to expect that the relationships she’s formed here will only expand and extend.
— David R. Adler

This album was supported by a grant from The Shifting Foundation.